This project included the installation of speed bump in a road crossing the city of Portugalete. 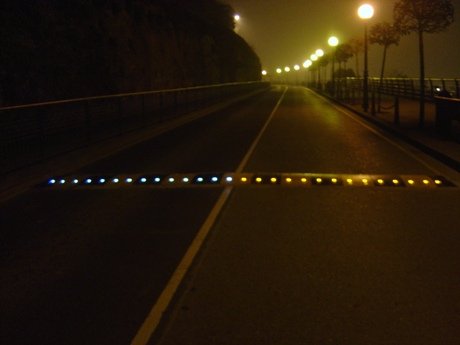 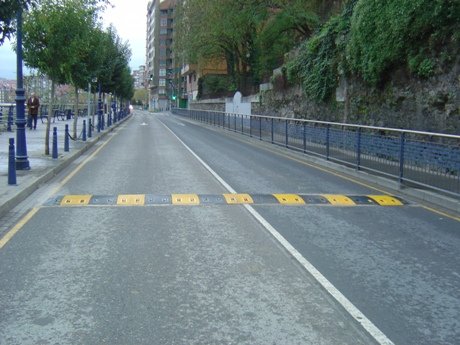 
History
The BI3739 road is located on the left bank of the Nervion River, in Bizkaia, is the main communication road of an area of over 200.000 inhabitants.

The part of the road which goes across the town of Portugalete raised serious accessibility problems, especially for the pedestrians, who did not have a proper area to walk in a safe way. It was also a problem for the drivers’ safety, as it was a very narrow road, where vehicles has tendency to exceed the speed limits and the accident rates were very high.

In 2006, because the situation was unbearable, some changes were made to the 800m of road that crossed the town. The changes included making the road wider and to build a new pedestrians’ zone because there was not one until that moment.

The result was a new road, with a high traffic of buses and coaches, heavy duty vehicles, cars, two-wheeled vehicles (including cyclists), and pedestrians walking between towns, as there are five schools in the zone.

Difficulties
Accidents, following the known ‘Risk homeostatic theory’, did not decrease, on the contrary, they increased. Although it was an urban section of the road, it was straight and the drivers tended to exceed the speed limit easily, reaching 120km/h. In addition, in the zone there was often fog and the weather conditions were not good.

Despite being a completely new road, at the end of the straight there was a dangerous curve (known as ‘el mirador del Puente Colgante’), where many serious accidents occurred, due to the high speed and the pedestrians’ zone invasion.

Installing rubber Speed Bumps was useless, as they were badly located and they easily broke down.

Solution
In October 2011th, in collaboration with the Portugalete Council, it was decided to install an SPEDD BUMP ECOBAM RDV 800/50 with LED lighting.

This pilot project achieved two main objectives: the practice test made the ECOBAM RDV the first and only Speed Bump authorized in Europe; and it was possible to reduce the accident rate to zero, thanks to the traffic calming and the good visibility of the Speed Bump with LED illumination System.

Traffic calming is constant, so the accident rate nowadays is zero, and the pedestrians are not in danger anymore.

This case of LED ECOBAM is a real demonstration that an effective road safety and zero accident rate is not a utopia, it is a reality.